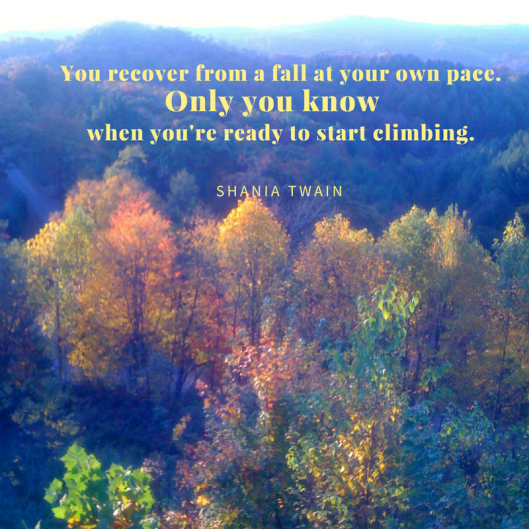 It’s been 15 years since we’ve heard from country star Shania Twain, who finally has a new album out. Turns out she’s spent the last decade and a half doing hard stuff, including bringing a marriage to an end and digging herself out of the emotional void that divorce typically creates.

In an interview with Alison Abbey, she says she chose to let herself experience the devastation of divorce:

“When you leave a long-term relationship, everything you know, everyone you know, and all of the dreams that you were building for your future — that’s all just gone …

“I gave up on fighting the way I was feeling … The more you ignore it and try to pretend that it’s not happening, the longer it takes you.”

It’s hard to let yourself experience that much pain! Especially at a time when the medical profession’s diagnostic bible, the DSM-V, says that 2 weeks is the outer window for behaving as if something terrible has happened. After a couple of weeks, employers start to urge a call to the EAP and friends start to say we need to see a counseling professional. And then the counseling professional tells us that we’ve been sad for more than 2 weeks so we have a “clinical depression” which requires weekly professional counsel and probably medication to get us back to “normal.”

I like Twain’s approach better. Big losses make big hurts. Big hurts force big changes. And when you’ve had a big hurt, my job as a Christian isn’t to push you away to a professional — it’s to “rejoice with those who rejoice; mourn with those who mourn” (Rom 12:15). God is the healer, and He’s got lots more than two weeks to hang out and  do the work.

It’s only recently, by the way, that clinical professionals have insisted on  treating major loss as major depression. Philip Hickey’s article on the recent history of this diagnostic trend is excellent, although very long.